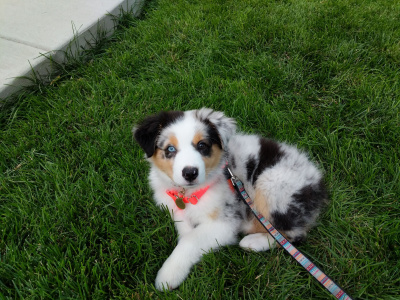 Bowie sleeps a little more than half of his day. Puppies sleep for between 15 and 20 hours a day [2]. Bowie's routine cycle is, roughly, an hour of food/training, an hour of play, 2-3 hours of sleep.

At night (when you want to sleep), Bowie is pretty calm; however, he seldom makes it through a full night sleep without needing a potty break. Taking him out at night happens at irregular times—just whenever he's whining and it's been a while since he last went outside (2-3 hours). Although nighttime potty breaks are irregular, some patterns have emerged: 10pm, 2-3am, 4-5am. About 1/3 of the time, the 2-3am wake-up won't happen. If he's had a lot of exercise that day, it won't happen.

He's not very good at tug of war yet, except with your pant legs (cf: biting), but as part of Fetch he plays. I've been trying to interest him more in tug of war as a form of play currency instead of treats. He's interested, but not a pro. 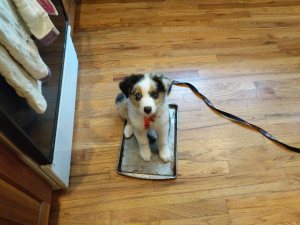